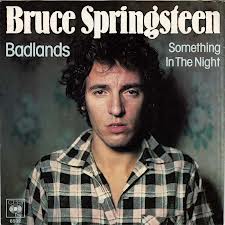 In September 1973 his second album, The Wild, the Innocent & the E Street Shuffle, was released, again to critical acclaim but no commercial success. Springsteen’s songs became grander in form and scope, with the E Street Band providing a less folky, more R&B vibe and the lyrics often romanticized teenage street life. “4th of July, Asbury Park (Sandy)” and “Incident on 57th Street” would become fan favorites, and the long, rousing “Rosalita (Come Out Tonight)” continues to rank among Springsteen’s most beloved concert numbers.
In the May 22, 1974, issue of Boston’s The Real Paper, music critic Jon Landau wrote after seeing a performance at the Harvard Square Theater, “I saw rock and roll’s future, and its name is Bruce Springsteen. And on a night when I needed to feel young, he made me feel like I was hearing music for the very first time.” Landau subsequently became Springsteen‘s manager and producer, helping to finish the epic new album, Born to Run. Given an enormous budget in a last-ditch effort at a commercially viable record, Springsteen became bogged down in the recording process while striving for a wall of sound production. But, fed by the release of an early mix of “Born to Run” to progressive rock radio, anticipation built toward the album’s release. All in all the album took more than 14 months to record, with six months alone spent on the song “Born To Run”. During this time Springsteen battled with anger and frustration over the album, saying he heard “sounds in [his] head” that he could not explain to the others in the studio. It was during these recording sessions that “Miami” Steve Van Zandt would stumble into the studio just in time to help Springsteen organize the horn section on “Tenth Avenue Freeze-Out” (it is his only written contribution to the album), and eventually led to his joining the E Street Band. Van Zandt had been a long-time friend of Springsteen, as well as a collaborator on earlier musical projects, and understood where he was coming from, which helped him to translate some of the sounds Springsteen was hearing. Still, by the end of the grueling recording sessions, Springsteen was not satisfied, and, upon first hearing the finished album, threw the record into the alley and told Jon Landau he would rather just cut the album live at The Bottom Line, a place he often played.