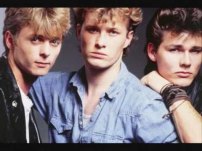 Sales were aided in the U.S. by heavy rotation on MTV of the new music video, which may have been inspired not only by the truck-chase scene from Terry Gilliam’s film Brazil but also by the climactic scene from Ken Russell’s film Altered States. The video used a pencil-sketch animation / live-action combination called rotoscoping, in which individual frames of live video are drawn over or colored. It became one of the most instantly recognizable and most enduringly popular music videos in the U.S., where it was nominated for eight awards at the third annual MTV Video Awards in 1986, winning six, including Best New Artist in a Video, Best Concept Video, Best Direction, Best Special Effects, and Viewer’s Choice and Best Video of the Year. Their six MTV Award wins for that video gave them twice as many wins as Michael Jackson’s “Thriller” and more than any artist in the three years of the awards combined.

About me ? Nothing special. If you want to find something please visit my blog.
View all posts by Cristi M. →
This entry was posted in Video and tagged a-ha, a-ha biography, a-ha history, a-ha hits, a-ha songs. Bookmark the permalink.