A-HA – The Swing Of Things. 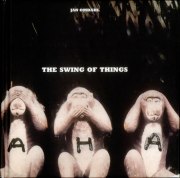 East of the Sun, West of the Moon was certified Gold in Switzerland, Brazil, and Germany, and Silver in the UK.Steven McDonald of AllMusic said of their fourth album, “This is a nicely crafted collection of songs, performed and sung beautifully, with lots of echoes and suggestions tucked into the music. While not an album one can discuss at length, it’s an album that’s a pleasure to listen to.” The album sold 3.2 million copies worldwide.
Their last album before their hiatus was Memorial Beach, in 1993. Relative to previous releases, the album was a commercial disappointment. The only single from the album to officially chart outside Norway was “Dark Is the Night“, which peaked at number 19 in the United Kingdom. Memorial Beach is notably the last official American release by A-ha to date, although their material has continued to have limited availability there as imports. Despite the commercial reception, Q magazine listed the album as one of the 50 best albums of 1993. The following February, A-ha performed two concerts during the 1994 Winter Olympics in Lillehammer, Norway, followed by tours of South Africa and Norway. A-ha was also chosen to compose the official song for the Winter Paralympic Games in Lillehammer, which they entitled “Shapes That Go Together”.A-ha entered a hiatus period in 1994, and band members then focused on solo projects.

About me ? Nothing special. If you want to find something please visit my blog.
View all posts by Cristi M. →
This entry was posted in Video and tagged a-ha, a-ha biography, a-ha discography, a-ha fan, a-ha hits, a-ha songs. Bookmark the permalink.

2 Responses to A-HA – The Swing Of Things.