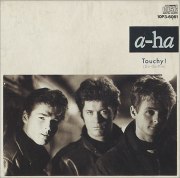 Furuholmen revealed in an interview published in Magasinet, the magazine section of Norway’s third largest newspaper, Dagbladet, that he’s suffering from a heart disease. The news was picked up the same day by the electronic music magazine Side-Line.At the Spellemannprisen award show on 5 March 2011 in Oslo, Norway, various Norwegian artists from various music genres including Kaizers Orchestra, Ida Maria and Bertine Zetlitz performed a cover of one of A-ha‘s biggest hits, “The Sun Always Shines on TV”, in honor of the band. After the performance, the band received the Spellemannprisen honorary award handed out by A-ha‘s Norwegian music colleagues with the words “Our Heroes – Once upon a time, now – still and forever”.

About me ? Nothing special. If you want to find something please visit my blog.
View all posts by Cristi M. →
This entry was posted in Video and tagged a-ha, a-ha biography, a-ha discography, a-ha fan, a-ha history, a-ha songs. Bookmark the permalink.