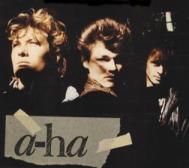 Together with his wife, and drummer Frode Unneland, he has performed in the band Savoy. Savoy have achieved great success in Norway, selling over 300,000 records. They have been nominated for Spellemannsprisen (Norwegian equivalent of the Grammy Award) four times and have won three times.A-ha version of the song “Velvet” appears in the film One Night at McCool’s and “Whalebone” appears in the highly acclaimed Norwegian film Hawaii, Oslo.
Magne Furuholmen describes Waaktaar-Savoy thus: “Påul is the person who has meant most to me in my musical development and yet he’s the one person I find it most difficult to say anything sensible about. He has incredible will-power and a watchful eye, always searching for material he can use creatively. In a way, I have idolized Pål for years and I still depend on him to help me sort out my own ideas.”

About me ? Nothing special. If you want to find something please visit my blog.
View all posts by Cristi M. →
This entry was posted in Video and tagged a-ha, a-ha biography, a-ha discography, a-ha fan, a-ha history, a-ha songs, paul waaktaar-savoy. Bookmark the permalink.