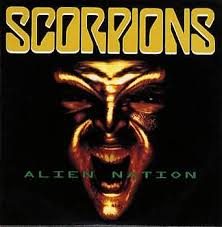 In 1980 the band released Animal Magnetism, again with a provocative cover this time showing a girl kneeling and a Doberman Pinscher sitting in front of a man. Animal Magnetismcontained classics such as “The Zoo” and “Make It Real”. Soon after the album’s release, Meine began experiencing throat problems. He required surgery on his vocal cords and doubts were raised about whether he would ever sing again.
Meanwhile, the band began working on their next album, Blackout in 1981. Don Dokken was brought in to provide guide and backing vocals while Meine recovered.[18] Meine eventually healed completely and was able to finish the album. Blackout was released in 1982 and quickly became the band’s best selling album to date, eventually going platinum. Meine’s voice showed no signs of weakness and fan response to the album was good. Blackout spawned three singles: “Dynamite”, “Blackout”, and “No One Like You”.