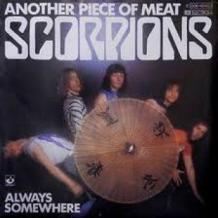 On the Savage Amusement tour in 1988, Scorpions became only the second Western group (not American) to play in the Soviet Union. Uriah Heep had performed in December, 1987 in Leningrad. The following year the band returned to perform at the Moscow Music Peace Festival. As a result, Scorpions developed an extended Russian fan base and still return to perform.Wishing to distance themselves from the Savage Amusement style, the band separated from their long-time producer and “Sixth Scorpion”, Dieter Dierks, replacing him with Keith Olsen when they returned to the studio in 1990. Crazy World was released that same year and displayed a less polished sound. The album was propelled in large part by the massive success of the ballad “Wind of Change“. The song muses on the socio-political changes that were occurring in Eastern Europe and in other parts of the world at the end of the Cold War. On July 21, 1990 they joined many other guests for Roger Waters’ massive performance of The Wall in Berlin. Scorpions performed both versions of “In the Flesh” from The Wall. After the Crazy World tour Francis Buchholz, the band’s long-serving bassist, left the group.