Scorpions – Another Piece of Meat. 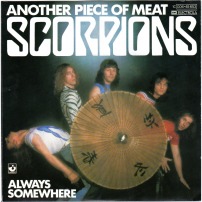 Prior to recording their 13th studio album, 1996s Pure Instinct, drummer Herman Rarebell left the band to set up a recording label. Curt Cress took charge of the drumsticks for the album before Louisville, Kentucky-bornJames Kottak took over permanently. The album had many ballads. Still, the album’s singles “Wild Child” and the soothing ballad “You and I” both enjoyed moderate success.
1999 saw the release of Eye II Eye and a significant change in the band’s style, mixing in elements of pop and techno. While the album was slickly produced. The video to the album’s first European single, “To Be No. 1”, featured a Monica Lewinsky look-alike which did little to improve its popularity.