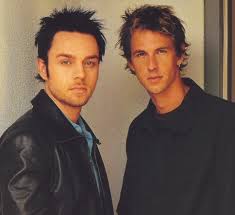 “I Want You” was released in North America in February, where it peaked at No. 4 on the United States Billboard Hot 100 and by April had achieved gold status according toRecording Industry Association of America (RIAA). It peaked at No. 1 on the Canadian Singles Chart. “Truly Madly Deeply”, the band’s third Australian single, was released in March and reached No. 1 and soon became their signature song. In March, the duo’s debut album, Savage Garden, entered the Australian charts at No. 1 and peaked there for a total of 19 weeks. According to rock music historian, Ian McFarlane, “[It] revealed the influence of 1980s UK pop on Hayes and Jones’ songwriting. Tears for Fears melodies blended seamlessly with Eurythmics-like arrangements, while Cure-styled guitar provided the icing on the cake”. The album was released internationally two weeks later. “I Want You” was released across Europe in April and reached No. 11 on the United Kingdom Singles Chart. At the end of May, “To the Moon and Back” was the most played song on US radio.