Queen – March Of The Black Queen. 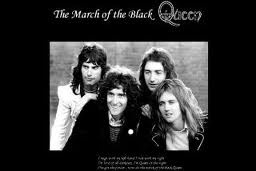 In 1978, the band released Jazz, which reached number two in the UK and number six on the Billboard 200 in the US. The album included the hit singles “Fat Bottomed Girls” and “Bicycle Race” on a double-sided record. Queen rented Wimbledon Stadium for a day to shoot the video, with 65 naked female models hired to stage a nude bicycle race. Reviews of the album in recent years have been more favourable. Another notable track from Jazz, “Don’t Stop Me Now”, provides another example of the band’s exuberant vocal harmonies.
In 1978, Queen toured the US and Canada, and spent much of 1979 touring in Europe and Japan. They released their first live album,Live Killers, in 1979; it went platinum twice in the United States. Queen also released the very successful single “Crazy Little Thing Called Love”, a rockabilly inspired song done in the style of Elvis Presley. The song made the top 10 in many countries, topped the Australian ARIA Charts for seven consecutive weeks, and was the band’s first number one single in the United States where it topped theBillboard Hot 100 for four weeks. Having written the song on guitar and played rhythm on the record, Mercury played rhythm guitar while performing the song live, which was the first time he ever played guitar in concert. In December 1979, Queen played the opening night at the Concert for the People of Kampuchea in London, having accepted a request by the event’s organiser Paul McCartney.