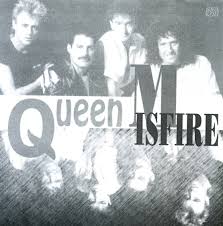 After fans noticed Mercury’s increasingly gaunt appearance in 1988, rumours began to spread that Mercury was suffering from AIDS. Mercury flatly denied this, insisting he was merely “exhausted” and too busy to provide interviews. The band decided to continue making albums, starting with The Miracle in 1989 and continuing with Innuendo in 1991. Despite his deteriorating health, the lead singer continued to contribute. For the last two albums made while Mercury was still alive, the band credited all songs to Queen, rather than specific members of the group, freeing them of internal conflict and differences. In 1990, Queen ended their contract with Capitol and signed with Disney’s Hollywood Records, which has since remained the group’s music catalogue owner in the United States and Canada. That same year, Mercury made his final public appearance when he joined the rest of Queen to collect the BRIT Award for Outstanding Contribution to British Music. Innuendo was released in early 1991 with an eponymous number 1 UK hit and other charting singles including, “The Show Must Go On”. Mercury was increasingly ill and could barely walk when the band recorded “The Show Must Go On” in 1990. Because of this, May had concerns about whether he was physically capable of singing it. Recalling Mercury’s successful performance May states; “he went in and killed it, completely lacerated that vocal”. The band’s second greatest hits compilation,Greatest Hits II, followed in October 1991, which is the eighth best-selling album of all time in the UK and has sold 16 million copies worldwide.