Queen – Sleeping On The Sidewalk. 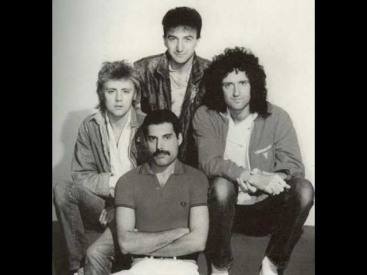 In the autumn of 2009, Glee featured the fictional high school’s show choir singing “Somebody to Love” as their second act performance in the episode “The Rhodes Not Taken”. The performance was included on the show’s Volume 1 soundtrack CD.In June 2010, the choir performed “Another One Bites the Dust” in the episode “Funk”.In May 2012, the choir performed “We Are the Champions” in the episode “Nationals”, and the song features in The Graduation Album.
In September 2010, Brian May announced in a BBC interview that Sacha Baron Cohen was to play Mercury in a film of the same name.Time commented with approval on his singing ability and visual similarity to Mercury.However, in July 2013, Baron Cohen dropped out of the role due to “creative differences” between him and the surviving band members.In December 2013, it was announced that Ben Whishaw, best known for playing Q in the James Bond film Skyfall, had been chosen to replace Cohen in the role of Mercury.The motion picture is being written by Peter Morgan, who had been nominated for Oscars for his screenplays The Queen and Frost/Nixon. The film, which is being co-produced by Robert De Niro’s TriBeCa Productions, will focus on Queen’s formative years and the period leading up to the celebrated performance at the 1985 Live Aidconcert.