Queen – If You Can’t Beat Them. 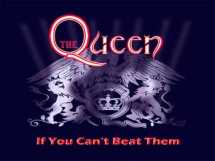 Two songs that May had composed for his first solo album, “Headlong” and “I Can’t Live With You”, eventually ended up in the Queen project. His other composition was “The Show Must Go On”, a group effort in which he was the coordinator and primary composer, but in which they all had input, Deacon and Taylor with the famous chord sequence. In recent years, he has supervised the remastering of Queen albums and various DVD and greatest hits releases. In 2004, he announced that he and drummer Roger Taylor were going on tour for the first time in 18 years as “Queen”, along with Free/Bad Company vocalist Paul Rodgers. Billed as “Queen + Paul Rodgers”, the band has played throughout 2005 and 2006 in South Africa, Europe, Aruba, Japan, and North America and released a new album with Paul Rodgers in 2008, entitled The Cosmos Rocks. This album was supported by a major tour.