Queen – Let Me Entertain You. 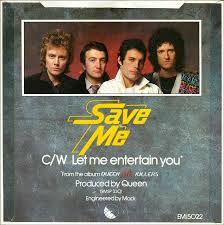 During 1983, several members of Queen explored side projects. On 21 and 22 April in Los Angeles, May recorded his first solo work, a mini-album entitled Star Fleet Project, on which he collaborated with Eddie Van Halen.May contributed to former Genesis guitarist Steve Hackett’s album Feedback 86, playing guitar on the track “Cassandra” and providing guitar and vocals for “Slot Machine”. “Slot Machine” was also co-written by May.May worked with his second wife Anita Dobson on her first album, in which she sang vocals to the EastEnders theme tune. In this form the tune became the song “Anyone Can Fall in Love”.May himself produced the song, which reached No. 4 in the UK Singles Chart in August 1986.[19]In 1989, May contributed guitar solos to the song “When Death Calls” on Black Sabbath 14th album Headless Cross, and the Living in a Box track “Blow The House Down” from the album Gatecrashing.
“After the tragic break-up of any band, it feels impossible to continue but I was really glad that Brian did launch a solo career. He had such a lot of music in him and a great deal more to give”—Joe Satriani