Queen – Pain Is So Close To Pleasure. 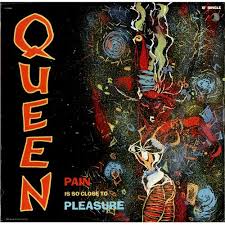 In 1987 Mercury celebrated his 41st birthday at the Pikes Hotel, Ibiza, several months after discovering that he had contracted HIV. Mercury sought much comfort at the retreat and was a close friend of the owner, Anthony Pike, who described Mercury as “the most beautiful person I’ve ever met in my life. So entertaining and generous.” According to biographer Lesley-Ann Jones, Mercury “felt very much at home there. He played some tennis, lounged by the pool, and ventured out to the odd gay club or bar at night.” The party, held on 5 September 1987, has been described as “the most incredible example of excess the Mediterranean island had ever seen,” and was attended by some 700 people. A cake in the shape of Gaudi’s Sagrada Família was provided for the party, although the original cake collapsed and was replaced with a 2 metre-long sponge with the notes from Mercury’s song “Barcelona.” The bill, which included 232 broken glasses, was presented to Queen’s manager, Jim Beach.