Queen – Is This The World We Created. 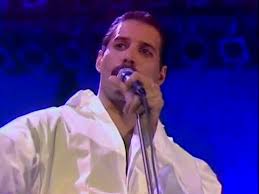 In his will, Mercury left the vast majority of his wealth, including his home and recording royalties, to Mary Austin and the remainder to his parents and sister. He left £500,000 to his chef, Joe Fanelli; £500,000 to his personal assistant, Peter Freestone; £100,000 to his driver, Terry Giddings; and £500,000 to Jim Hutton. Mary Austin continues to live at Mercury’s former home, Garden Lodge, Kensington, with her family.
The outer walls of Garden Lodge in 1 Logan Place became a shrine to Mercury following his death, with mourners paying tribute by covering the walls in graffiti messages. Three years after his death, Time Out magazine reported, “Since Freddie’s death, the wall outside the house has become London’s biggest rock ‘n’ roll shrine.” Today fans continue to visit to pay their respects with messages in letters appearing on the walls. Hutton was involved in a 2000 biography of Mercury, Freddie Mercury, the Untold Story and also gave an interview for The Times for what would have been Mercury’s 60th birthday.