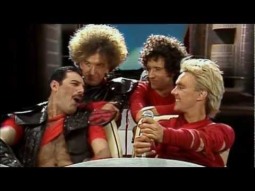 Taylor’s next venture, Strange Frontier, came in July 1984. The three singles from the album were the title track, “Beautiful Dreams” (in Portugal only) and “Man on Fire”, the latter becoming a live favourite for him in later years. No attempts to promote the singles were made since Queen toured to promote The Works, and Taylor did not perform on any TV shows. Strange Frontier included guest appearances by bandmates Freddie Mercury and John Deacon. Mercury sang backing vocals on “Killing Time”, Deacon remixed the B-side “I Cry For You” and Rick Parfitt co-wrote and played on “It’s An Illusion”. David Richards, Queen’s engineer and producer at the time, also co-wrote two of the tracks. The album includes covers of Bruce Springsteen’s “Racing in the Street” and Bob Dylan’s “Masters of War”.